Home > Travel > Things to see in Gravina in Puglia 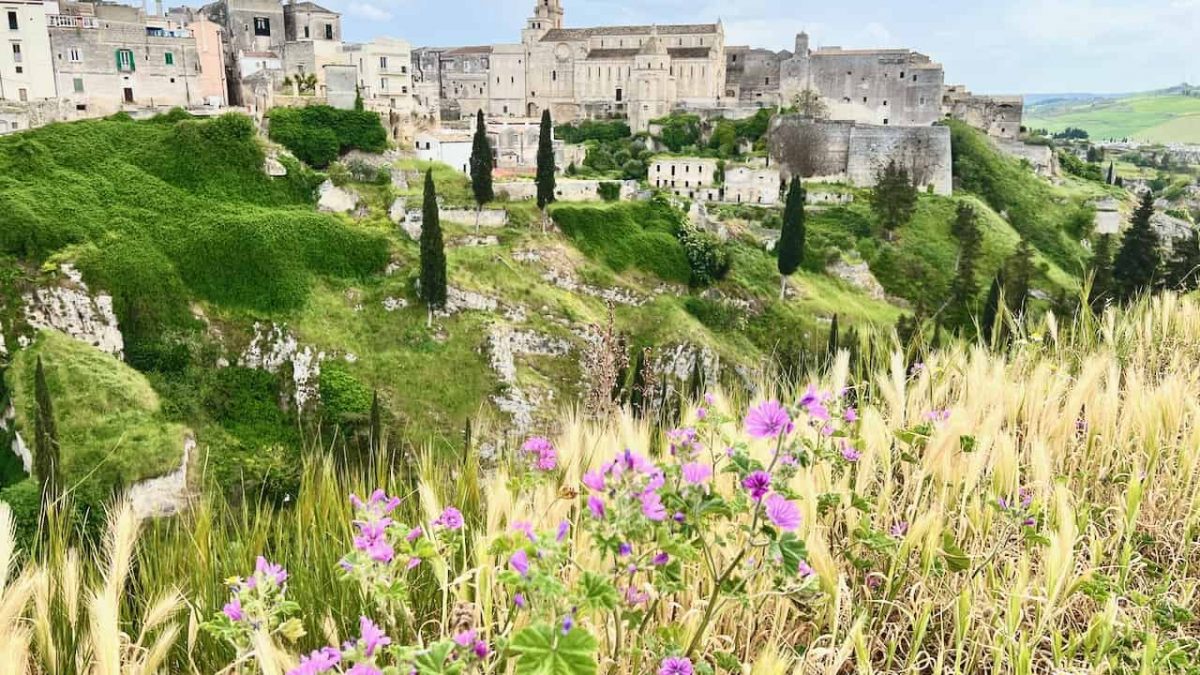 Things to see in Gravina in Puglia


Gravina in Puglia is an ancient town in central Puglia in southern Italy (map), with a history that goes back to the Neolithic age. I first read about Gravina in Puglia after watching the James Bond movie ‘No Time To Die’. Various scenes were filmed in nearby Matera but the bridge he walked along and later jumped off clearly wasn’t in Matera. I researched the bridge and learned that it’s located in Gravina in Puglia! It just so happened that I was planning a Puglia road trip so I naturally included Gravina in Puglia in my itinerary. When I arrived, I was glad that I planned an overnight stay as there are many things to see in Gravina in Puglia. This town was a joy to explore. As I walked around its quiet streets, it felt like an exciting new ‘discovery’ on my travel radar!

Gravina in Puglia is built on the edge of a ravine, and like Matera, it has an ancient quarter with dwellings and churches hewn out of the rocky hillside. Due to its strategic location on the Via Appia (the ancient Roman road linking Rome with Brindisi) and its fertile lands, Gravina in Puglia prospered. In the 13th century, Emperor Frederik II built a hunting lodge in his beloved ‘land of wheat and wine’, remains of which can still be seen (look for the Swabian Castle outside the town).

The best thing to do in Gravina in Puglia is to simply explore the town on foot. Make sure you have sturdy shoes as there are some steep sections on smooth cobblestones, and quite a few steps to climb.


The town’s most famous attraction is its bridge. It was built in the 17th century, was then destroyed by an earthquake in 1722, and was later restored and repurposed as an aqueduct by the Orsini’s, a powerful family from Rome.

On the other side of the bridge lies the ancient quarter (nowadays, the Botromagno Archeological Park), with its age-old monuments, cave dwellings and churches carved out from the rock (chiese rupestri). Of the churches, Chiesa rupestre di San Michele delle Grotte, with its five naves, stone columns, frescoes and intriguing skeletal remains, is perhaps the most interesting. This side also offers the best views of Gravina in Puglia!

Things to see in the old town

Return to the old town across the bridge and wander around its picturesque lanes. From the medieval bastion, there are superb views of the bridge and the ravine. Higher up in the town, places of interest to look out for include:

Built by the Normans in the 12th century, the Cathedral is absolutely worth a visit. Step inside to see its amazing gold-gilded ceiling and beautiful arches.

Named after Pope Benedict XIII (13th century), who was born in Gravina in Puglia, this is the main square in the old town.

We all know Coca Cola as the famous, fizzy beverage. In Gravina in Puglia, Coca Cola refers to a type of whistle made of clay in the shape of a bird. The makers of Coca Cola span five generations. I found it fascinating to learn about the family’s story and how the whistle became a symbol of the region at the Casa Museo Coca Cola, their ancestral home located opposite the Cathedral. A Coca Cola sure is a colourful souvenir from Gravina in Puglia!

There are several ancient cave churches in the old town that are worth a visit such as San Basilio and San Michele.

Under the town lies a large network of caves and tunnels. The spaces and rooms, carved out of the rock, were used to store grain and wine, but also as living quarters and churches. Visit Gravina Sotterranea for tickets to a fascinating subterranean tour, a great thing to do in Gravina in Puglia if you’re comfortable with underground spaces.

Other places to see in the old town

I recommend spending at least one night in Gravina in Puglia as there are many things to see and do. And, seeing the main sites lit up in the evenings is absolutely magical!

Gravina in Puglia is famous for its food and wines. It also produces its own type of bread and cheese. Try the Fallone di Gravina, the local cheese made from a mixture of sheep’s and goat’s milk, which add subtle spicy notes to the cheese. Another local cheese to look out for is Pallone di Gravina that’s made of pasteurised cow’s milk and is shaped like a ball. For wine lovers, ask for the local Gravina DOC, a gorgeous white that’s available as a still or sparkling wine.

Restaurants in Gravina in Puglia I can recommend are Mamma Mia (offers an extensive menu and views across the ravine), Osteria Radici (superb local cuisine in a beautiful cave-like setting), and 13 Volte (a stunning restaurant in an undergound cave spanning several levels).

I stayed at the lovely B&B Sul Ponte, located a stone’s throw from the bridge. It’s an old building, therefore be prepared to climb stairs to the upper levels. I chose the Deluxe Double which turned out to be somewhat of a honeymoon suite, with a massive bathroom (featuring a jacuzzi) and two balconies with wonderful views!

Search for accommodations in Gravina in Puglia (Booking.com).

Gravina in Puglia is definitely in my book as one of the best places in Puglia to visit! Add it to a Puglia road trip itinerary and/or combine it with a visit to Matera, just 30 minutes away.

What drugs should not be taken with CBD?

Recap of Mainnet by Messari, SmartCon by Chainlink, & Converge22 by Circle